Taking on a New Look at the Colorado State Patrol

(Colo.) - The Colorado State Patrol (CSP) in its continued pursuit of keeping the public and Troopers safe on our roadways is slowly phasing out the familiar silver and black Dodge Charger and taking on a new look. The Dodge Durango is set to replace the Dodge Charger fleet over a five-year transition period, becoming the next vehicle platform for the CSP.

“As we move towards fully adopting the Durango, we have an opportunity to take advantage of some of the difference in the vehicles,” stated Lt. Colonel Barry Bratt. “The SUV platform sits up higher and the rear hatch provides a larger surface for our reflective graphics.”   In 2020, the Colorado State Patrol began to incorporate improved safety graphics such as highly visible blue and white reflective chevrons on the rear of the vehicles.  “These chevrons point traffic away from the patrol car in an effort to reduce crashes where our officers are rear-ended while stopped, “explained LTC Bratt. “We are committed to doing all we can to ensure the safety of our officers while stopped on the side of the road.”

The Durango will also have the words "State Trooper" on both the front and rear so motorists can quickly identify our vehicles.

The Colorado State Patrol is also continuing to utilize an emergency lighting package on both the Charger and the new Durango designed to improve visibility but not blind approaching traffic.  Rather than flashing lights, motorists will see that when the vehicle is stopped, the entire light bar stops flashing and instead glow with reduced intensity.  At night, an automatic sensor will reduce the light intensity even further.

The new Dodge Durango will be added to the current fleet as older vehicles are replaced across the state. The public will slowly start to see more of these patrol vehicles in their area in the future as we retire the Dodge Charger format. 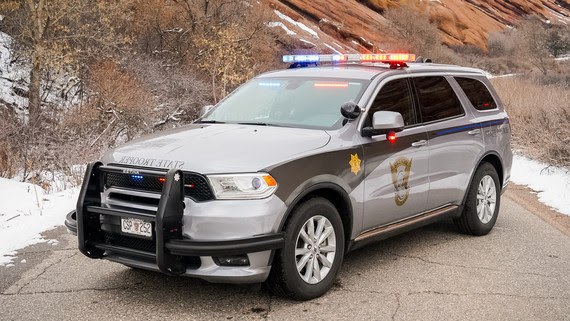 ABOUT THE COLORADO STATE PATROL
Since our origin in 1935, the Colorado State Patrol (CSP) has focused on preserving human life and protecting property within our communities. Our 1,100 members embody the core values of Honor, Duty, and Respect in their daily jobs.  In addition to our expertise in motor vehicle safety on the state’s roadways, the CSP is responsible for the Governor and other dignitaries’ protection, commercial motor vehicle enforcement, hazardous materials, homeland security, communications, investigative services, criminal interdiction, community education, aviation operations, and more. For additional information, visit us online at Colorado State Patrol or follow us on Twitter, Instagram, YouTube, or Facebook.