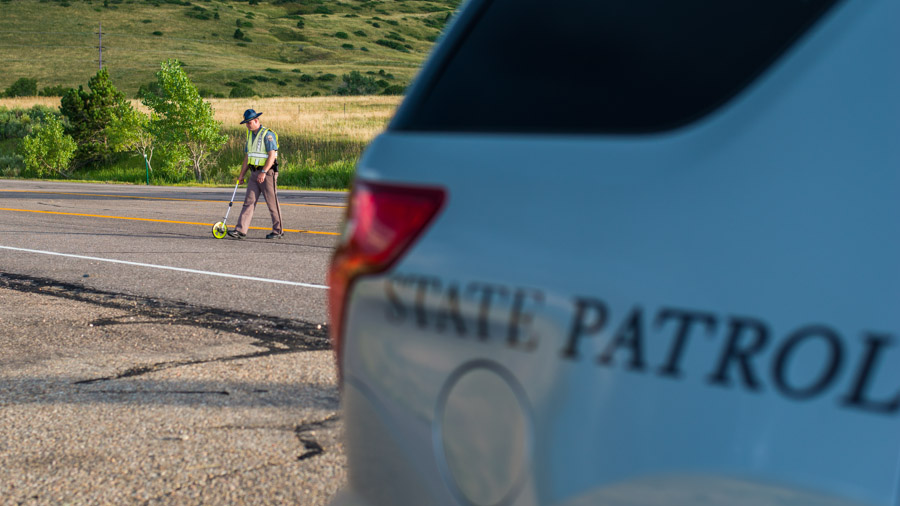 A serious crash is like a puzzle, with pieces such as damage, debris, witness statements and sometimes trace evidence strewn about the scene. Each of the Colorado State Patrol's five field districts has an Vehicular Crimes Unit Team to put the pieces back together and create a picture of how the event occurred. The team members have the specialized skills, training and equipment necessary to investigate and reconstruct these serious crashes.

Each of the twenty-five VCU members must be a Level IV Re constructionist, skilled in utilizing computer technology in creating scale maps of the scenes and analyzing momentum and crush energies (The basic crash investigator is a Level I). At crash scenes, the VCU members use a special laser-mapping device to gather data for creating scale diagrams. Other equipment is used to measure the friction of the roadway, slopes and to interpret/measure other evidential facts for their reconstructions.

After the vehicles are removed from the scene, the vehicles are examined to determine if a mechanical failure contributed to the crash. Systems such as brakes, steering and the tires are all examined. The damage to vehicles is also measured.

The data gathered is interpreted, analyzed and calculated to determine factors such as speed and visibility over time and distance. Sometimes the VCU is required to determine who was driving, based on trajectory and trace evidence left behind in a vehicle.

The VCU members are responsible for most crashes involving fatalities and felony charges. The members are also called upon to assist other agencies in serious crashes or crimes.