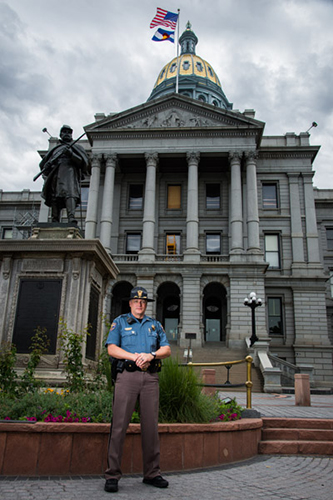 The Executive Security Unit (ESU) is a special unit of the Colorado State Patrol that has existed since the State Patrol was created in 1935. The unit consist of troopers, civilian security guards and a command center work force. The ESU provides 24-hour security at the State Capitol complex and at the Governor's Residence. In addition, the unit provides transportation and security for the Governor and the First Family.

Because the ESU has unique responsibilities beyond those of typical State Patrol personnel, ESU troopers have received specialized training in dignitary protection, bomb detection, critical incident management and media relations from agencies such as the FBI, the U.S. State Department and the U.S. Secret Service.

The ESU also has a small office within the Capitol building, which is used to provide direct customer services for legislators, staff and visitors during normal business hours.

The ESU Bicycle Patrol
In 2000, a six-person bicycle patrol was created. The bicycles are used to patrol the Capitol complex and Veterans' Park. Bicycles offer some unique advantages in such locations -- they allow quicker response times and they can get into smaller places where patrol cars can't go.

The Executive Security Unit may be contacted by phone at 303-866-3660.
CDPS Employee Security Access Application